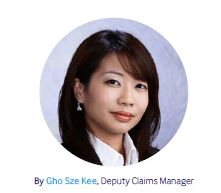 During periods in which the global shipping economy is volatile, the likelihood of unpaid freight or hire occurs with higher frequency. Recently, the Club has witnessed charterers facing difficulty in meeting their obligation to pay freight due under a charterparty. In such circumstances, the shipowner may want to know if he is able to exercise a lien on the cargo until he has been paid the freight or hire due under the charterer.

There must be a right of lien in the charterparty

Examples of widely drafted lien clauses, that extend to protect the shipowners right to lien, are clause 8 of GENCON 1994 charterparty and clause 23 of NYPE 93.

Only when hire or freight under a charterparty becomes ‘due’ and ‘payable’ can the shipowner secure his rights against the party in default, by exercising a lien over the carried cargo. 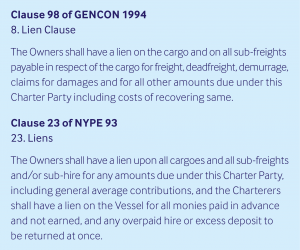 The lien clause must be incorporated into the bill of lading

“All terms and conditions, liberties and exceptions of the charterparty, dated as overleaf, including the Law and Arbitration Clause/Dispute Resolution Clause, are herewith incorporated”.

As such, where the bill of lading incorporates a lien clause for unpaid hire (as opposed to freight), the shipowners then has a right under the bill of lading to lien the cargo regardless of whether it is owned by the charterers.

Even if both the charterparty and the bill of lading are governed by English law, the shipowner must determine whether liens are recognised in the jurisdiction where the lien is to be exercised. In some jurisdictions, most commonly civil law jurisdictions, liens are not recognised and cannot be exercised unless the cargo is owned by the defaulting party. In addition to determining whether the right to lien is recognised by local law, the shipowner must also examine whether any formalities are required in order for a lien to be effectively exercised.

The shipowner must take sufficient steps to secure and exercise his right of lien (before parting possession of the goods).

A lien over cargo is a possessory lien meaning that the lien will be redundant once possession is lost. For that reason, the shipowner must take appropriate measures to safeguard his right of lien over the cargo by, for example, warehousing the goods on his own account and expense. The retention of continuous possession, or at least of exclusive control of the cargo, is crucial for the exercise of a lien.

Unless expressly allowed by the charterparty, or provided under the local law, the shipowner is not entitled to sell the cargo. The existence of a power of sale will depend on the wording of the contract of carriage or the charterparty. In any case, the shipowner is under a duty of care towards the liened cargo and will be answerable for any loss or damage to the party entitled to the cargo.

The shipowner must notify parties who have an interest in the cargo (for example the charterer or the bill of lading holder) of his intention to exercise his lien. Failure to give such notice should only be considered as crucial in circumstances where notice is required under the contract or local law.

For cover to be made available to owners in potential dispute with a charterer and/or bill of lading holder, in the event of unpaid freight or hire, this would fall under the Club’s Legal Assistance and Defence cover (LADC).

For further information and insights regarding our LADC cover please visit: www.shipownersclub.com/ladc