The Shipowners’ Club > News > Paul Smit, Ashwin Nair & Indu Chitran: Has the Club experienced any claims as a result of vessels being laid up? What type of claims are likely to arise?

When a vessel is out of service, there is an alluring tendency to think that the risk of incidents will correspondingly pause. This may be true to an extent, but it is not necessarily the case.

The Club has seen claims (sometimes large claims) arising from vessels in layup involving pollution, wreck removals and collisions with other vessels as well as fixed and floating structures. There are potentially a number of causes of these types of incidents, but most of them occur in some degree because of a lack of reduced control and supervision of the vessel at the relevant time.

For example, if the vessel’s hull springs a leak and in the absence of regular sounding of the spaces, the water ingress may go unnoticed until the damage has already been done. Leaks may also cause flooding of the holds or engine compartments and, in drastic cases, this may cause the vessel to sink, eventually leading to Members being ordered to remove the wreck. Further, it is often the case that smaller vessels are tied up in banks of about three or four. In bad weather, mooring lines may part causing one or more of the vessels to drag anchor and drift into other vessels. Similarly, once freed of mooring lines and/or anchor, a vessel may come into contact with navigational markers/buoys, bridges or jetties and, in particularly rough seas or bad weather, the vessel can cause significant damage.

An example of a Claim involving a laid up vessel

To illustrate, we draw Members’ attention to a particularly large claim arising from a vessel in layup. Our Member’s vessel was laid up in a layup anchorage facility in Indonesia. Our Member was assured that the anchorage was sheltered, safe, equipped with 24/7 control tower monitoring and that there were emergency response plans in place with employees that were fully trained to act proactively. 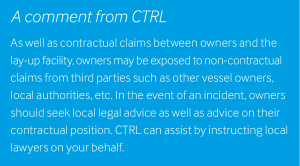 While laid up, weather conditions deteriorated and caused our Member’s vessel to drift from her anchored position and strike a bridge about four nautical miles away. When the ebb tide caused the vessel to come away from the bridge, the maintenance crew onboard temporarily secured the vessel using her two anchors. Rescue tugs arrived and tried to make fast. However, in the course of doing so, the vessel struck the bridge a second time. It was not until nearly 36 hours after first coming into contact with the bridge that the vessel was finally towed away from the bridge and safely anchored. The bridge sustained significant damage and Members were presented with a claim in excess of US$ 3m in respect of damage to the bridge and alleged environmental damage.This case starkly illustrates how things can go wrong even when a vessel is laid up with a maintenance crew onboard. 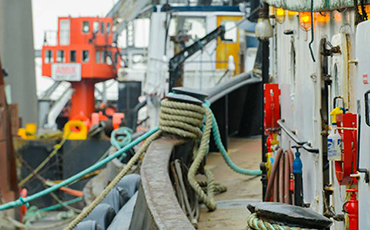