Dan Hook CEng, MRINA is a qualified Naval Architect and Chartered Engineer with over 15 years’ experience in the unmanned marine industry. Dan currently holds the position of Senior Director – Business Development at ASV Global. Dan has built a vibrant team of naval architects, engineers and robotics experts, seeing the company grow from three people to over 100 in just seven years. He is also the current Chairman of the Maritime Autonomous Systems (MAS) Council run by the Society of Maritime Industries, and is a member of the Solent Marine and Maritime Steering Group.

Autonomous marine systems are becoming ever more popular across a range of industries including defence, science and offshore energy. While the adoption of Autonomous Underwater Vehicles (AUVs) happened some years ago, attention has now turned to Autonomous Surface Vehicles (ASVs) to aid, and in some cases, fully replace traditional manned vessels.

ASVs help to maximise operational efficiency as they are able to operate effectively for long periods of time without requiring rest breaks. They’re also cost effective to procure and run as they are most often smaller than the manned equivalent. Furthermore, it has been noted that ASVs undertaking scientific research and surveys often produce the same, if not better, quality data with lower background noise and are capable of accurate, highly repeatable navigation.

Autonomous vehicles aren’t just small, ASV Global’s larger, ruggedised work class vessels are in operation all over the world, completing vital inspection, repair and maintenance jobs such as subsea positioning, hydrographic survey and ROV profiling within the energy sector. We continue to see the development of ever larger systems and predict a strong growth in the >24metre sector.

As Senior Director at an experienced operating company and having built a large number of ASVs, with over 1500 unmanned operational days, I have identified five keys steps for any unmanned operation, based on a recent oil & gas task:

1. Scope of the operation

This is arguably the most important part of any task using an unmanned vessel. This is the part of the process where you must capture the customer’s requirements and needs with relation to the intended operation. You must understand the who, what, where, why and how, in order to propose the right vessel, communications system, task plan and payload for the operation and conceptualise how the task will run smoothly and how the safety plan will be managed.

The vessel must then be prepared for the task at hand. This stage most often includes system testing however, at ASV Global, this would also include payload integration. We integrate a range of sensors based on the customer’s preference rather than a set suite. Part of the safety case for the vessel is to ensure that all possible operators are fully trained and familiar with the system. Here, we carry out our own MAS(S) Operators course[1] which includes real on water use of the system as well as classroom theory.

The unmanned system then needs to be transported to the location of the operation; this may be on a customer support vessel as with our latest assignment where our ASV C-Worker 7, the first ever unmanned vessel on the UK Ship Register, was operated from an oil & gas support vessel whilst being used for pipeline touchdown monitoring. Further safety and system checks are crucial once mobilised and delivered to the operation location. Once this is complete, it’s time for launch. ASV Global’s ASVs have a number of bespoke launch and recovery methods. The C-Worker 7 in particular has a bespoke three lifting point system that works with an automatic lifting hook. 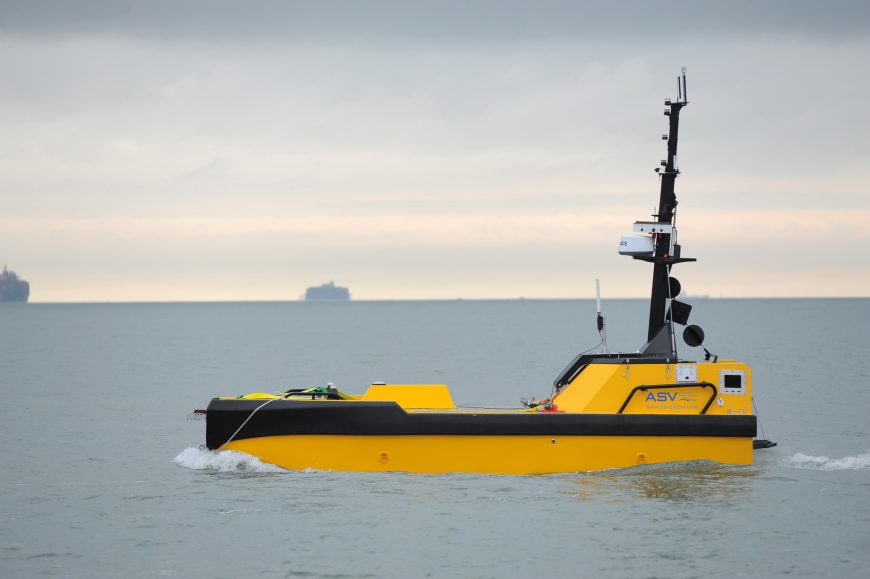 Once the vessel’s pre-launch checks are completed and the vessel is launched the operation can then begin. Following the task plan and ensuring that previous training of operators has been effective is crucial to a successful mission. Whether your unmanned vessel is running a hydrographic survey, towing passive acoustic monitoring system or even acting as target for gunnery trials, the operator in the control station must be confident in their ability to work with the system.

ASView® is ASV Global’s proprietary control system, developed and optimised specifically for autonomous and remote control of unmanned vessels and the conversion of manned vessels for unmanned use. This system, is utilised across our vehicles and ensures that our operators are familiar with our control mechanism in order to be able to work across a range of vehicles and applications. The operator is given multiple camera feeds for situational awareness, a radar display and AIS is integrated with marine navigation charts. We are seeing increasing levels of capability in our systems for automated collision avoidance and goal-based autonomy. However, at present all commercial operations are fully supervised by a ‘man in the loop’ approach.

Once the operation is complete, it’s time to recover and demobilise the vessel. Once on board the support vessel, or ready for demobilisation, it is important to do another thorough systems check ahead of preventative maintenance and preparation for the next assignment.

In these recommended steps the ASV is operating from a support vessel. However, we continue to see increased numbers of operations where the ASV is operated from shore without a support vessel. As the systems get ever bigger this trend will continue to the point where vessels with some level of autonomous control systems will regularly depart from and return to port, with all supervision conducted from a remote operations centre.

This article is one in a series of article produced by the Club on the topic of autonomous vessels, from the Club’s perspective. View the series so far.