Jason Eden is the founder and CEO of Sleep and Fatigue Research Ltd (Safr) who use technology to monitor and manage crew fatigue. The company has worked with industries such as aviation, road transportation, the emergency services and NHS and financial services. Before Safr, Jason was a pilot and safety manager in the UK’s Royal Air Force and was a member of the RAF’s Fatigue Risk Management Working Group.

Over the past few years, several of the Club’s loss prevention initiatives1 have identified sleepiness and long-term fatigue to be recognised as a major factor impacting accidents at sea. In order to understand this causation factor further, the Club has partnered with Safr on an innovative project to investigate whether wearable technology can be utilised in the marine environment to assist the mitigation of this risk by enabling shipping companies to identify fatigue hotspots within their operations.

Fatigue is widely acknowledged to be a problem in safety-critical industries. It affects error rates, accident rates, health and wellbeing, and staff retention. It impacts cognitive ability, decision-making, risk behaviour, and much more.

It was found that workers who obtain less than five hours sleep a night are more than three times as likely to be involved in an accident2. After 17 hours of being awake, performance can be reduced to the same extent as if the individual were over the drink-driving limit3. Up to 25% of fatal road accidents are wholly or partly a result of driver fatigue (ROSPA / DfT).

Moreover, it is now clear that lack of sleep is not just associated with increased rates of cancer, heart disease, stroke, obesity, diabetes, anxiety, depression, and many other physical and mental health problems; it has been shown to be a cause of them4.

Scientific studies have also proven that it is not enough to simply ask an individual how they feel as,  if a  person is fatigued, their perception of their performance is often impaired. The graphs below show the number of mistakes that are made as a result of restricted sleep (left graph) versus how an individual perceives their level of fatigue over the same duration (right graph). The difference between how fatigued an individual thinks they are, compared with how fatigued they actually are, exemplifies the necessity for a system that effectively measures and manages fatigue. 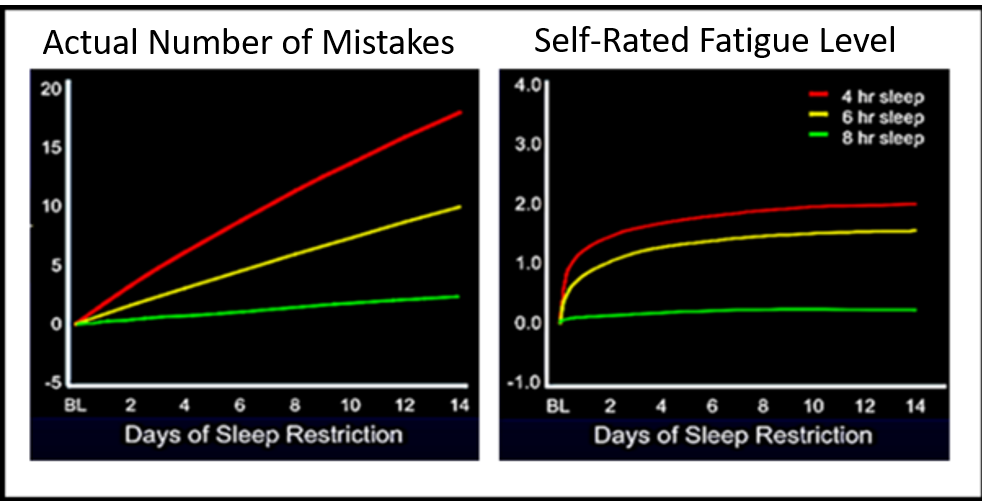 Safr use the latest generation of consumer wearables, scientifically validated fatigue algorithms, a mobile app, and a suite of management software to understand how fatigue manifests within a given organisation, to improve individuals’ understanding of their own fatigue level and how to improve it. This enables organisations to proactively manage their fatigue risks. The studies conducted so far show, that in almost every situation, there is something that can be done to improve fatigue within an organisation.

Consumer wearables, bio-mathematical model of fatigue and a mobile app to monitor and predict fatigue.

Recent studies on the effect of fatigue in the maritime environment, including an operator of offshore crew transfer vessels, have highlighted the impact of: