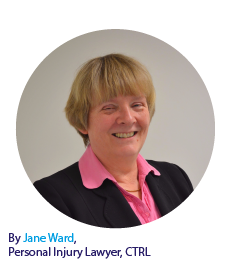 From 20 March 2017, the discount rate applied when calculating compensation for future losses in personal injury claims reduced from the 2.5% rate set in 2001 to -0.75%.

To what is the discount rate applied?

Damages in personal injury claims for which a defendant is found to be 100% liable are intended to put the claimant in the financial position he or she would have been in had the injury not occurred. Additionally, the damages provide an element of compensation for the claimant’s pain, suffering and loss of amenity (PSLA). PSLA and past financial losses, such as loss of earnings and care costs, are unaffected by the change in rate. However, in cases of serious injury where there are ongoing losses that can be quantified on an annual basis, including loss of earnings, the effect of this change is significant.

A 30-year-old engineer is seriously injured during his employment at sea. It is accepted that he will not be able to return to sea, but he will be able to work ashore using his engineering knowledge and skills. As a result, his net annual income will decrease by £10,000. He expects to retire at the age of 60.

To calculate the value of his future loss of earnings claim, his annual net loss (the multiplicand) is multiplied by a multiplier. This should produce a lump sum which, if invested, will provide a sufficient return, and when combined with the lump sum itself will produce £10,000 per annum for 30 years.

The multiplier is obtained from actuarial tables: the Ogden Tables. Each table sets out the appropriate multiplier for a different scenario and includes a range of discount rates to be applied to the actual number of years over which the loss is incurred. One of the tables sets out the multipliers to be used when calculating the loss of earnings for males who will retire at 60. Applying that table to the example:

This represents an increase of over 50% to this one element of future loss. In highly serious injury cases there are likely to be several elements of the claim to which the multiplicand/multiplier formula will apply.

Reaction to the change

Is the rate now fixed for the foreseeable future?

The answer to this is no. The Civil Liability Bill published on 21 March 2018 provides, among other reforms, for changes to the way in which the discount rate is determined, and perhaps more importantly, the frequency of review.

If this Bill becomes law, possibly in April 2019 or even sooner, the position will be as follows:

There seems to be no doubt that the first review, which must start within 90 days of the Bill coming into force, will produce an increase in the discount rate. The Government has stated that the current rate of -0.75% is overcompensating claimants, and the rate is speculated to rise to 0.5% or possibly 1% – but watch this space.