In 2018, the Club proudly launched a dedicated autonomous vessel P&I policy, the first of its kind in the world. The Club consulted owners, operators and manufacturers of autonomous vessels to ensure Members had the right cover in place so that they can focus on their operations knowing they are appropriately covered if anything should go wrong. Since then, we’ve gained several new Members who are doing exciting and innovative things with autonomous technology. This article features two of those Members and their recent achievements.

One of the Club’s first Members to operate an autonomous vessel is the UK based firm Hushcraft. They designed and built the SEA-KIT vessel (registered as USV Maxlimer). SEA-KIT is an autonomous surface vessel that can deploy and recover an autonomous underwater vehicle. Hushcraft’s website features videos of the craft in action. Representatives of the Club have met with Hushcraft several times to ascertain their cover needs and our Loss Prevention Director, Louise Hall, has been onboard SEA-KIT to carry out an inspection. 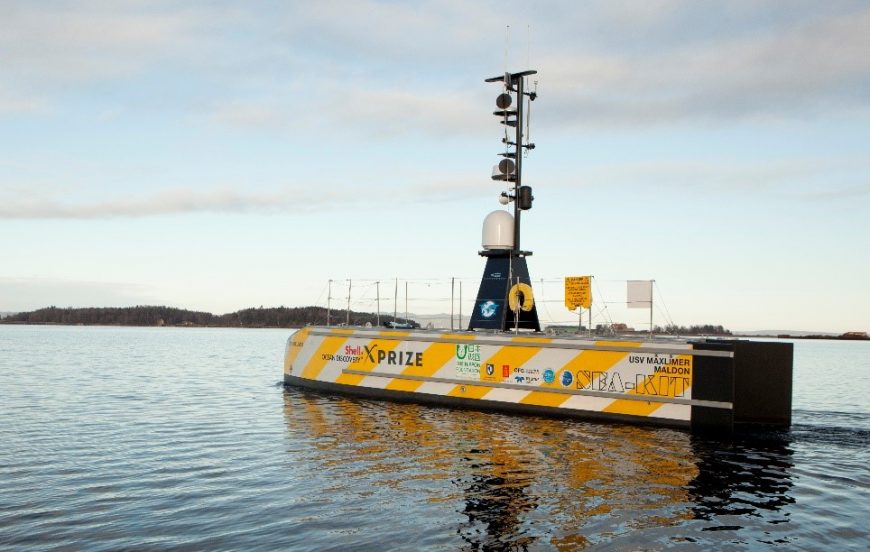 SEA-KIT recently completed an unmanned voyage from the UK to Belgium carrying a cargo of oysters. The vessel departed from West Mersea in Essex and arrived at Oostende port in Belgium on 7 May. It was welcomed by Belgian customs officers who took delivery of a box of oysters caught around Mersea Island. The box represented just a fraction of the vessel’s maximum payload of up to 2.5 tonnes.

The voyage, which lasted 22 hours, represents the first commercial crossing of the North Sea by an autonomous vessel, and marks a significant breakthrough in unmanned ocean transit. Its success showcased un-crewed navigation capabilities through GPS and satellite communication, including marine traffic avoidance in what is one of the world’s busiest shipping routes.

Ben Simpson, Managing Director of SEA-KIT International Ltd commented: “This voyage has been months in the making, and to see it all come together today is amazing…It demonstrates not only the capacity of SEA-KIT and the robustness of the design, but the value and effectiveness of the cloud based communications technologies involved in un-crewed transit.” 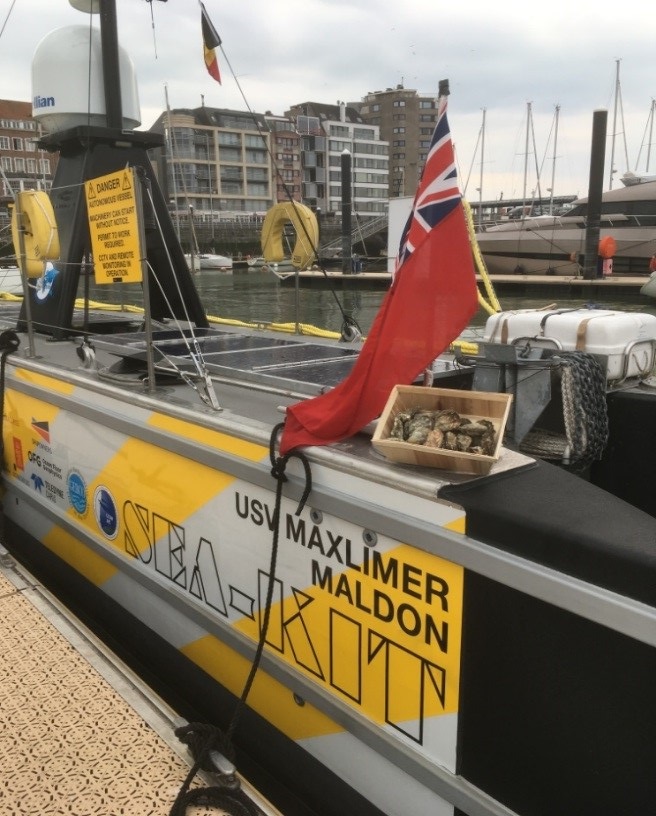 This achievement was widely reported in both the trade and national press including an article by the BBC.

The vessel and her operating team have since won the prestigious Shell Ocean Discovery X Prize competition for demonstrating the vessels capability to map the ocean bed in high resolution via deployment of an autonomous underwater vehicle that recorded the data. 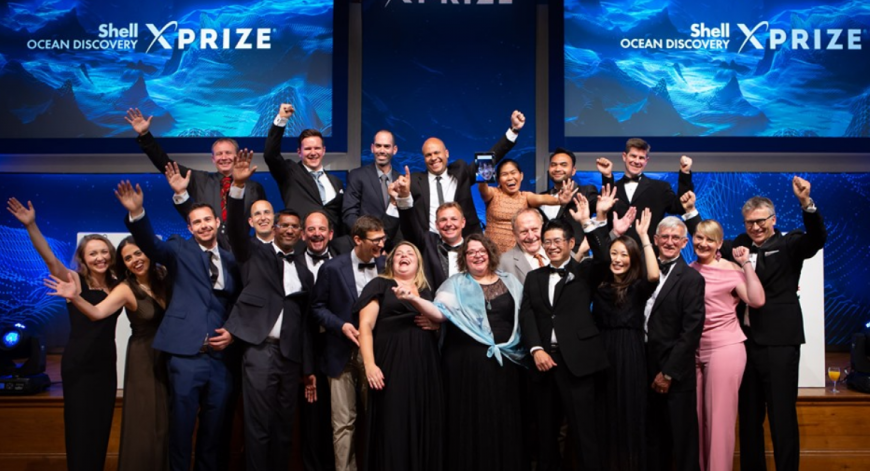 The competition took place over several rounds, each with a new challenge. The final round involved teams deploying their vessels 15 nautical miles (Nm) from the Greek port of Kalamata. They had just 24 hours to generate an extensive, high-resolution bathymetric (depth) map; and take a series of photos of the seabed. The GEBCO-NF Alumni team that operated SEA-KIT mapped an area of 278 square kilometres and returned more than 10 images of identifiable geological features. The seabed which they were mapping was over 4km deep at certain points.

The vessel has a range of up to 12,000 Nm and can fit inside a shipping container for easy deployment anywhere in the world. It can be used for applications such as: 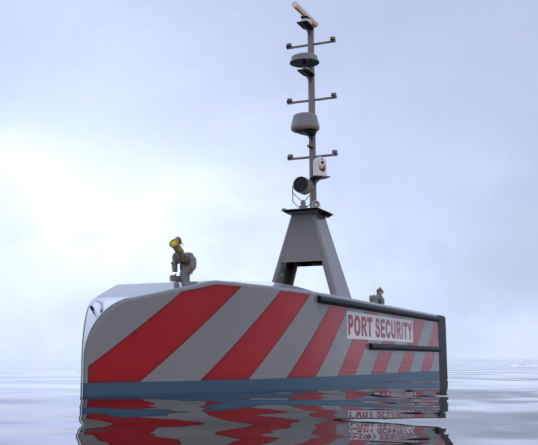 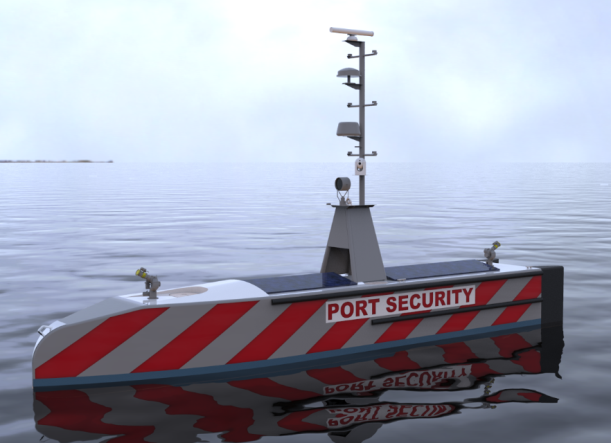 So, what does the future hold for SEA-KIT? The team are currently planning more missions to test and demonstrate the vessels capabilities under different scenarios, including an offshore mapping project around the UK in the next six months, followed by a transatlantic crossing within the next twelve months.

Team Tao used an autonomous surface vessel to deploy and recover underwater autonomous vehicles. These vehicles were small torpedo like drones referred to as Bathypelagic Excursion Modules (BEMs). The BEMs descend and ascend in the water using echo-sounders to map the seafloor as they move in a grid formation. The way in which the BEMs manoeuvre up and down enables them to sample the water column as they go. 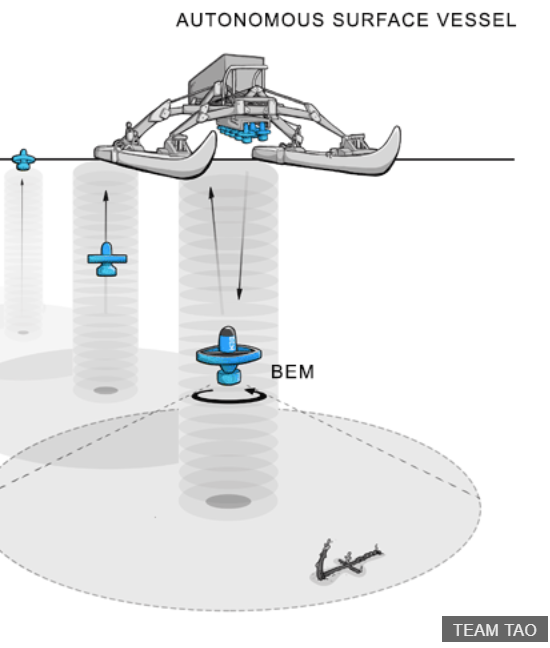 Team Tao was awarded a surprise bonus prize called the Moonshot award. This was awarded by the competition judges for showcasing disruptive technology – the judges felt that the highly innovative approach should be given special recognition.

Mike Jones, CEO of Soil Machine Dynamics (SMD) commented: “I am delighted that Team Tao have received this Moonshot Award… We began this journey with an ambitious dream on a minimal budget and secured a fantastic partner in Newcastle University to create Team Tao. Solving engineering problems by looking at them from a different angle is the essence of what we do at SMD, and together with Newcastle University, we have engineered a truly pioneering and cost-effective method of rapidly mapping the ocean floor and water column”.

The surface vessel and the sub-sea drones are all designed to be relatively low cost – the concept is for a system whereby several lower cost assets are deployed working in tandem to create a complex survey ecosystem.

These exciting achievements from two of our autonomous Members demonstrate that autonomous shipping is steadily moving into the realms of commercial applications. As the only P&I Club dedicated to small and specialist vessels, we will always remain at the forefront of this trend and are on hand to support our Members as they take up this new technology and opportunities it presents.