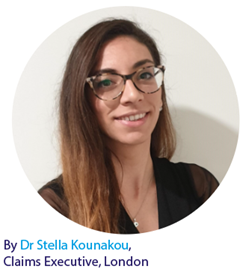 It is common in collision claims for Members to agree with the owners of the other vessel on an ASG2, the standard form of a collision jurisdiction agreement (CJA).

In the recent case of Pacific Pearl Co Limited v. Osios David Shipping Inc [2022] EWCA Civ 798, it was decided that when a party to ASG2 is offered security “in a form reasonably satisfactory”, it is obliged to accept it and cannot seek alternative or better security by arresting a ship.

On 16 August 2018, the agreement was signed and provided that each party’s claim would be determined exclusively by the English Courts in accordance with English law (Clause F), and that each party would provide security in respect of the other’s claim “in a form reasonably satisfactory to the other” (Clause C).

Whilst discussions were on-going as to the amount and terms of each party’s security, on 5 September 2018, the interests of Osios David arrested in South Africa the Panamax Christina which was owned by a company associated with the owners of Panamax Alexander.

On 7 September 2018, Britannia proposed a draft LOU to the interests of Osios David, which was based on the standard wording of ASG1, but with the addition of a ‘sanctions clause’ relieving the Club from its obligation to pay in certain circumstances. This clause was included because the Panamax Alexander had been on a voyage to Iran and the USA had recently announced the re-introduction of sanctions against Iran. So, Britannia were concerned that they might be unable to pay under their LOU if called upon to do so without breaching the sanctions regulations. However, the Osios David interests refused to accept such an LOU and refused to release the Panamax Christina unless security was provided without including a sanctions clause.

On 10 September 2018, the P&I Club of Panamax Christina (ie the UK Club) has finally offered such security in the form of an LOU, which provided for South African law and jurisdiction, and so the Panamax Christina was released.

There were two main issues raised for consideration before the Commercial Court.

Sir Nigel Teare focused on the first issue and held that the test for ascertaining whether a security is in a “form reasonably satisfactory to the other” is an objective one, with the reasonableness to be assessed by reference to the position of a reasonable person in the position of the proposed recipient of the LOU. However, he also stated that the inclusion of sanctions clause in a Club LOU is typical in cases with an Iranian nexus and that the legal and practical difficulties which had given rise to the insertion of such clause should have been considered as well. He further found that similar issues would have arisen, had a security been sought by way of an arrest instead of an LOU. Accordingly, it was found that the security provided by Britannia on behalf of Panamax Alexander was reasonable.

Regarding the second issue, it was held that both as a matter of construction and implication, no obligation could be inferred from the ASG2 wording on the part of Osios David interests to accept the LOU offered to them and to refrain from seeking alternative security by arresting a ship.

The Court of Appeal decision

On appeal, the Panamax Alexander interests (‘appellants’) submitted that under Clause C of the ASG2, the provision of reasonable security was a unilateral act. Therefore, the acceptance of the security by the other party was irrelevant. Alternatively, it was argued that, if necessary, as a matter of business efficacy a term should be implied into the CJA that a party offered reasonably satisfactory security should accept it.

On the other hand, the Osios David interests (‘respondents’) submitted that the purpose of ASG2 was to provide only a framework for negotiation with the expectation that if reasonable security was offered, it would be accepted, and not to create an obligation on the recipient party to accept it. Also, it was argued that there was no justification for implying any such term, given that the right to arrest is such a fundamental feature of Admiralty claims that any agreement to waive this right should have been clearly express. However, there was no such wording in the ASG2 with that effect as a matter of construction.

The Court of Appeal overturned the first instance court decision by finding that the respondents were in breach of the CJA for refusing to accept the appellants’ security. It was held that the wording of Clause C of the ASG2 did not intend to allow parties to seek alternative or better security by arresting a ship, when reasonable security has already been provided. It was stated that the whole purpose of the ASG2 scheme was for the parties to reach an agreement whose provisions would operate instead of an arrest in order to found jurisdiction, enable a claim to be served and provide for security to be given. Therefore, a different conclusion would render the scheme pointless, as parties’ objective to avoid the costs and delays caused by an arrest would not be achieved. For that very reason also the Court was prepared, if necessary, to imply a term that a party offered security in a reasonably satisfactory form would accept it within reasonable time.

Following this decision, the risk in the acceptability of security is now transferred from the offeror to the offeree, making it hence much harder to refuse it. Therefore, it is advised that when Members agree on a CJA in the form of ASG2 and an LOU is offered to them in a reasonably satisfactory form, they must think very carefully before rejecting it, as they not only may be found in breach of their CJA, but in the meantime they will also be deprived of taking any further action to secure their claim. Members should further bear in mind that a Club LOU including a sanctions clause can constitute a security in a reasonably satisfactory form for the purposes of ASG2 and so, the exact wording of the CJA should be carefully considered and drafted. Most importantly, it should be certainly reassuring to Members that the judgment recognises and supports the strength and security of the LOU offered by IG P&I Clubs in an effort to expedite their Members’ disputes and prevent their vessels from being arrested.