The term ‘overspill’ means that a loss has spilled over, or exceeded, the limits of liability available through the General Excess of Loss Reinsurance Programme which protects mutual Members of the International Group of P&I Clubs. Currently this would be an individual claim which exceeds US$ 2.1 Billion.

In theory every claim that falls in excess of this figure is due for payment by the mutual Members of all 13 P&I clubs through an overspill contribution. The mechanism by which funds are collected is known as an overspill call. However, an owner’s liability is not unlimited. Each IG Club has a maximum overspill contribution amount which their mutual Members are collectively expected to contribute. This is called the Club’s ‘overspill limit’ and is calculated by applying the vessels individual property limitation value in accordance with the 1976 London Limitation Convention.

Vessel owners incurring a maritime claim, as covered by the Club Rules, can often limit their liability at law, a custom which is of ancient origin and was originally designed to offer an incentive for owners to take to sea and face the perils of shipping cargo. Nowadays there is no universal limitation regime; it varies from country to country and in places there may be no limitation regime available at all. Therefore, for the purposes of establishing a limit on the total overspill exposure of mutual members, the International Group applies a calculation of 2.5% of the property limitation amount available to ship owners, for each entered vessel, under the 1976 London Limitation Convention.

As such, the combined overspill limit of any one IG Club will vary as the number and size of vessels change within each Club. This also explains why there is no US$ figure shown as to the ultimate  limit of liability on a mutual P&I policy, instead it simply states  that cover is ‘As Per Rules’ as the theoretical overspill limit can adjust up or down and is reviewed by the IG annually. The current overspill limit represents a common minimum level of mutual cover provided by all the Group Clubs.

Vessel owners are reminded that claims arising from certain risks that are shared between the Clubs through the mutual pooling system are capped and would therefore not attract an overspill claim. These claims include pollution claims, where a limit of US$ 1 billion applies and passenger claims which are limited to US$ 2 billion.

Notwithstanding this additional overspill exposure to mutual members, the International Group purchase a specific reinsurance policy, called collective overspill reinsurance. This is designed to respond if and when a loss exceeds US$ 2.1 billion and may pay up to an additional US$ 1 billion moving the point at which an overspill call could be levied from US$ 2.1 billion to US$ 3.1 billion. To date, there has never been an overspill call. The diagram below illustrates the reinsurance structure for the 2017/18 policy year detailing the theoretical overspill limit across all IG Clubs which produces an overall limit on Club cover of approximately US$ 8 billion. 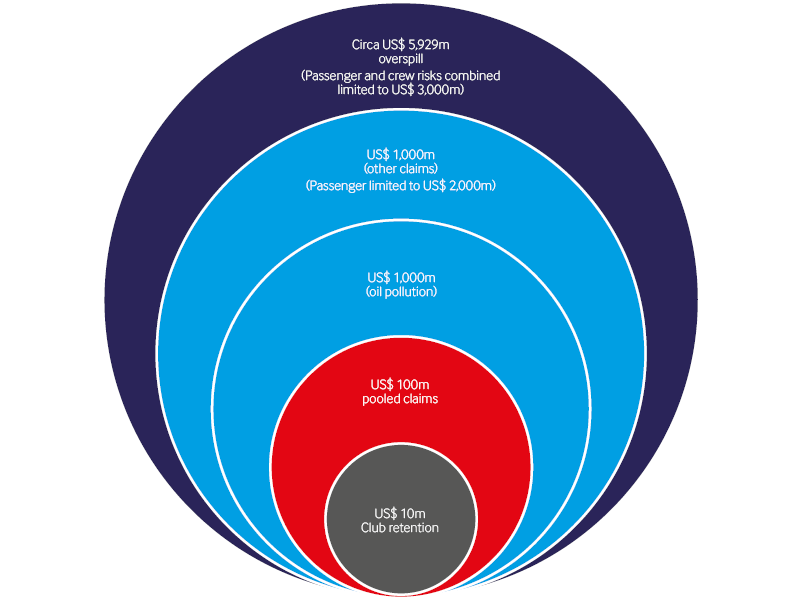 In our next blog we’ll be answering the question ‘What is a release call?’. Access the series of Navigating P&I articles so far.